I took Erdrique (Level 16 Druid) into the Sands of the Menechtarun over the weekend when I noticed a strange occurrence with the armored firebrand gnolls (the lieutenants, sergeants, etc.).  When I was attacking these armored firebrand gnolls, they lost their armor at some point.  I think it mostly happened after I tripped them.  The same occurrence happened with the rare encounter, Commander Errulf.  I happened to be able to take a quick screenshot below:

What happened to Commander’s Errulf armor?

You can see that in my focus orb that Commander Errulf is fully decked out in his heavy armor but the gnoll that I’m attacking looks like one of the lightly armored gnoll archers.  Not sure what is going on there but I thought it was curious indeed.

In any case, thanks for reading everybody and happy hunting out in the Desert!!

Written by Robert Burns, immortalized by John Steinbeck, and now badly conjugated by… me, the post title is a reference to things not working out the way they’re supposed to.

Once in a while, this is a GOOD thing. Take my intentionally-gimped bank bard, Getting. She was never supposed to be viable; her only mission in life was to provide storage space.

Completely by accident, she’s somehow managed to become a reasonably solid toon. Not a star by any means, but she’s surprisingly capable for a first-life Drow bard who dump-statted pretty much anything that wasn’t charisma.

I didn’t fully realize that until I logged in Sunday night to turn in sagas while the renown bonus was still active. Little gimpy Getting, the toon I never intended to play, had not one but TWO epic sagas completed… and on elite, no less. And she’s still only 23!

One of the dates that you’re going to want to writ into your calendar is September 29. That’s when Amazon Games Studio will be hosting its unboxing event in which the fresh-faced studio will share “some of the PC games Amazon’s been working on.”

The relatively new studio has been shrouded in secrecy for over a year now, lending itself to all manner of speculation about its projects. The question of personal relevance is, is Amazon Games Studio working on a genuine MMO or an MMO-but-not-in-name?

Here’s a quick bullet point list of what we know so far:

Survival games are nothing new any more, gone are the days when people looked at Minecraft and went “Whoa! Nothing else like this on the market” because well – nearly everything is trying to emulate that Minecraft appeal with certain twists.

In the last month or so we have had probably the biggest two culprits in my eyes to these pitfalls. These being ‘No Mans Sky’ and ‘The Tomorrow Children’. When both were revealed they didn’t even look like survival games. One promised unfathomable thoughts of exploring a universe that not one person in the world ever would be able to see all off. Instead, it descended into a mining game with minimal crafting options.

Then came ‘The Tomorrow Children’. Again, thousands of people saw this game of working together with your fellow players to erect this great city, killing monsters who threaten it and having your…

This build is new player friendly, but also not. The Pale Trapper is sort of a step in the “more advanced” direction for when you’ve gotten the basics down. The Pale Trapper is readily available to a new player, requires no tomes or Turbine Point item buys. However it does require a bit more in the way of tactics. More about that below.

I’d like to thank Forum user Ellisdee37 for posting this build. I used it as a basis for my own build, though there isn’t much that has changed. You can read his post here. The actual build I use can be found here.

I did add some of my travails the other day – which sounded more like butthurt whining over not being selected for an LE run, but in reality I found it somewhat laughable.

Maybe sooner or later someone will tell me that I don’t have enough HP on one of my toons – something I read and heard years ago.

Anyways – I did have some really interesting runs. I ran Defiler on Elite for the chance of pulling the helmet with melee power (or something else) and after a fairly smooth run (a few deaths on elite? I’ll take it) someone pulled the helmet and put it up for roll. Safe to say I won it and another for the strength based boots.

The only sad part is that melee power does not stack. (I should have known better) so I still have a better ring – the one out…

There are a large number of named spiders in DDO.  A glance at the DDOWiki shows at least 100 different types of spiders documented in DDO, with a large number of them being uniquely named boss monsters.  Some of the more well known spiders in the game include Whisperdoom (even though she is also a magical beast), Redfang, Miasma, Blood-drinker, and Venom.  However, another boss spider caught my eye when I was taking Erdrique (now a Level 5 Bard)  through his rogue heroic past life and working through his first epic reincarnation.  That spider is Shev’aal.  Shev’aal is an Astral Harrower, a type of spider currently only located in the Forgotten Realms half of DDO.  Shev’aal is an orange named mini-boss in the quest, The Portal Opens, which is the capstone quest to the arc known as the City of Portals.

After not having run together at all in August, last Friday Jarvanna met up with Schoan and Valdayanie for some legendary questing. I’m not sure we knew what we were getting ourselves into. We’re all level 27 and a bit undergeard, the legendary difficulty means the quests are level 31 upwards.

We started with Memoirs of an Illusory Larcener on legendary hard, and that one went pretty well.. except for the end fight  were we died and died and die some more before we got it done. 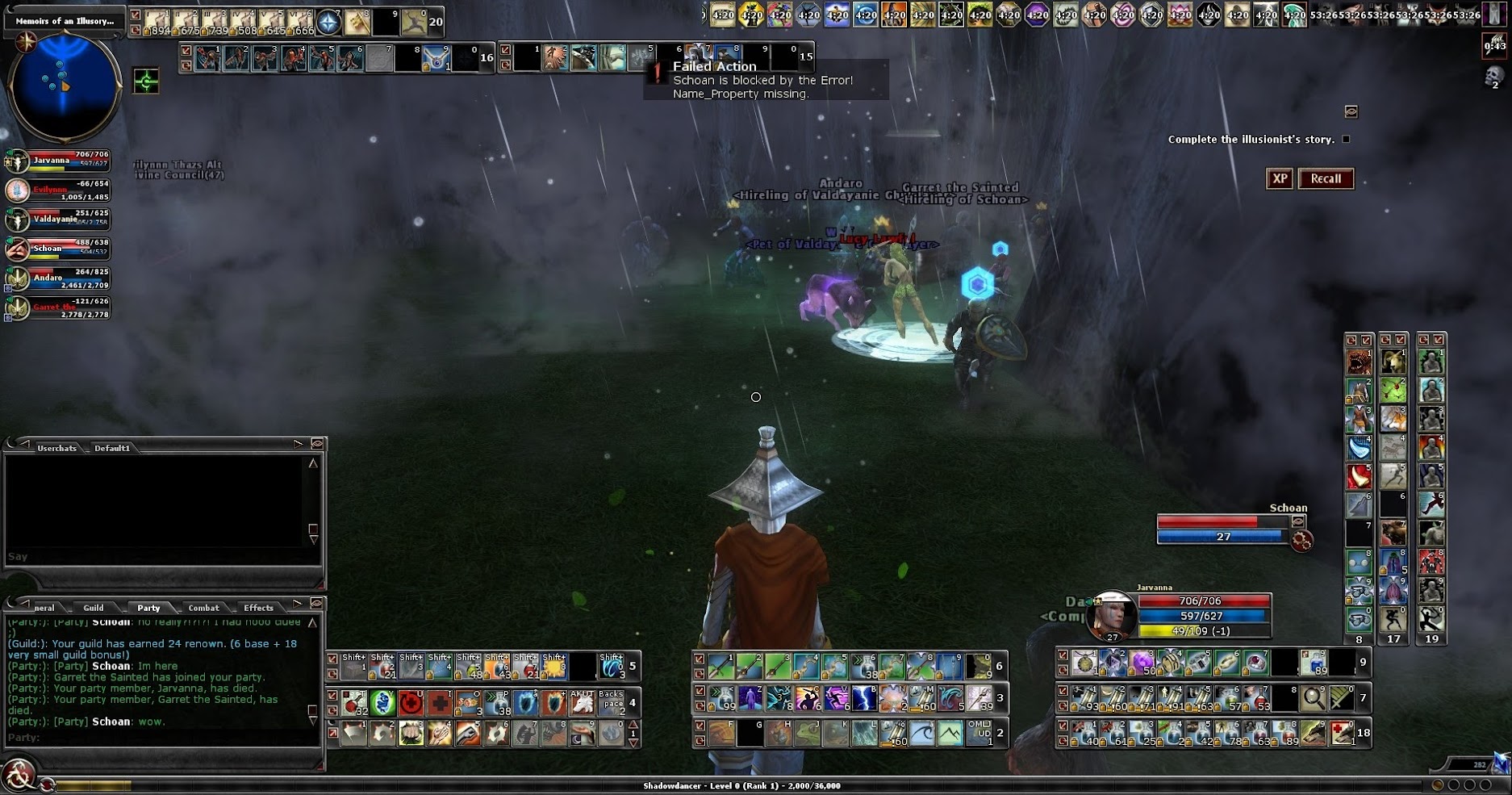 One of the upsides of DDO’s F2P switch is that they’ve really been cranking up the content releases — including a lot of stuff for free players.  I’m genuinely excited to read up on the imminent Update 5 (preview patch notes were released today), for the following reasons:

Taking our characters around and adventuring in the dangerous environs of Stormreach in DDO is quite rewarding but can also be quite enlightening as well.  The other day I took Harrgon (Level 10 Favored Soul) out into Three Barrel Cove and ran the quest Guard Duty.  Now, if you haven’t run the quest Guard Duty before, it is a simple quest where you are asked to protect a ship from some marauding pirates.  As you make your way through the ship to help fend them off you come across a grisly sight.

Harrgon thinking that he is glad he isn’t this guy, the second mate in Guard Duty.

The grisly sight is the second mate who was perished in a fiery blast and had some rubble crush him.  It just makes a player appreciate how the abilities and strengths his character to has and to power of exacting retribution…