BlueSilence on twitter asked to see a picture of Thazara and Cleazy, without the action of battle. I said I’d try to take one. This would have worked out better if I didn’t refuse to dismiss the dragon. Cleazy is also a not so easy person to snap a picture of, he really doesn’t stand still much, lol. Oh, and of course, Cleazy is a she. 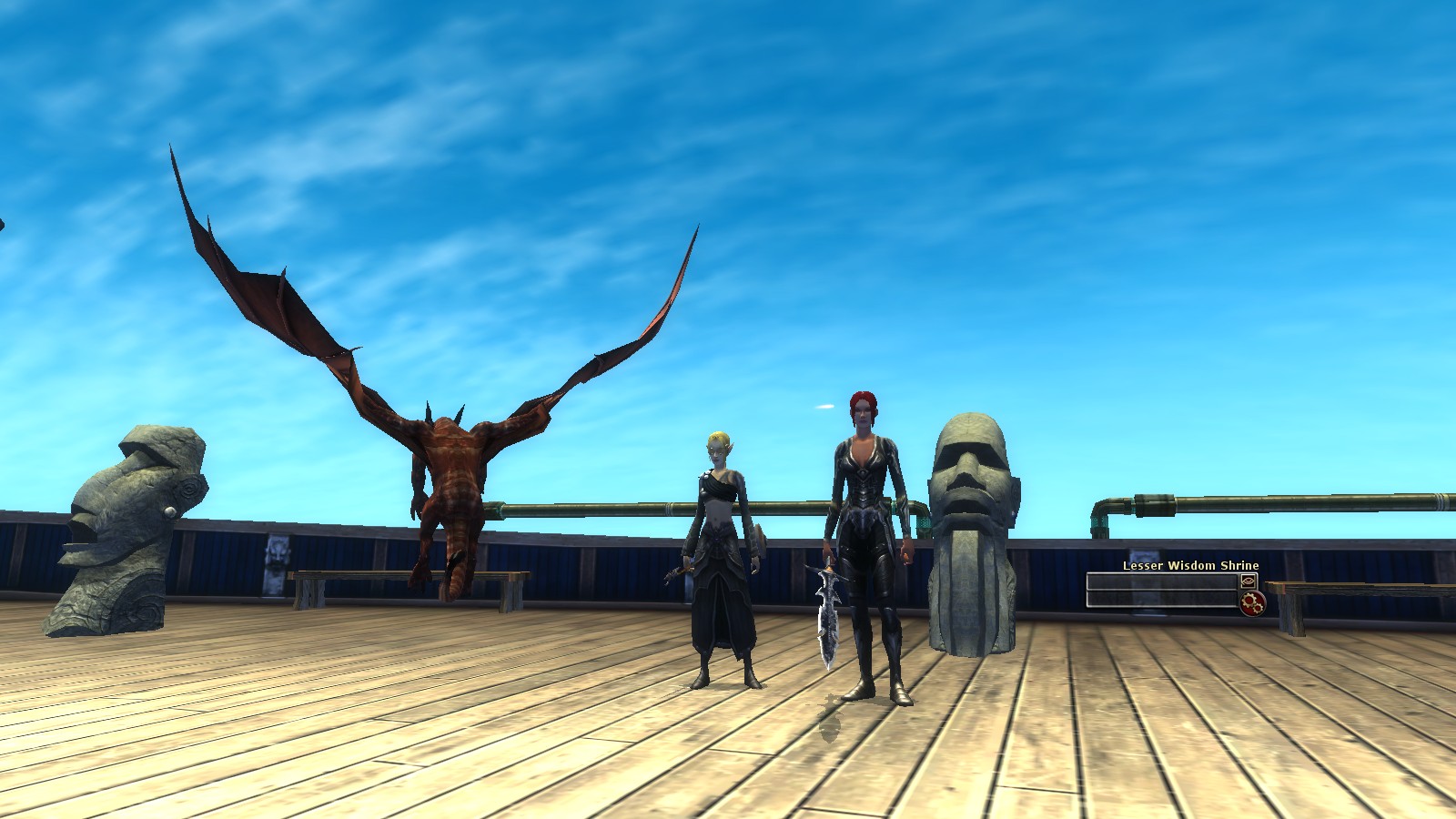 Thazara and Cleazy posing for the camera on the guild ship

Mabar had a raid made up by the unruly mob. There’s a reason why people are somewhat selective in raids. We don’t want so called DPS to show up with candle sticks and costing a completion or a whole party wipe.  I know, it’s just time, but time that could have been better spent with people who have a clue and don’t think Epic is best done in shorts and 200 HP.

Gone is the raid format and it’s now a group event; to be done with hirelings, solo or any size group.  So that’s good. The question is of course how it scales and if going from one level to the next does anything other than scale both rewards, XP and critter HP and damage. It’s good that Turbine is offering so many reviews so we can better help them balance the effect. Except for the fact…

I had been hoping to vent about what I’ve seen regarding the alpha of the Monk enhancements shown on the Lammania server last week but haven’t the stomach to chew through it as detailed as I wanted to as yet. As there were many, many things to discuss, I may need to make one large post that summarizes the good, bad and ugly I saw in the alpha.

I felt more compelled to throw myself into the game and enjoy one of my Monks before the enhancements reappear later on Lammania under beta tests. I guess I can take solace that the enhancement changes won’t be coming anytime soon.

My only Dark Monk, Ryncletica, has been on her first life for over two years. I leveled her slowly because I played her improperly, to be frank. While all of my Light Monks can heal themselves and have greater defensive and…

This post is the third in a series this month for International Picture Posting Month, see this post for more details.

Although I enjoy a variety of biomes in my online gaming, mountains have always inspired me for some reason. In MMOs mountains often represent a border between regions or a barrier to progress. They can also hide some interesting secrets; caves, ominous fortresses or long-abandoned ruins. Despite their imposing slopes or potential dead-ends and confusing switchback paths, mountains also should represent a way to climb and look down on a world – this post is about mountains that you can climb, not distant peaks that are simply high fidelity wallpaper.

1. Lord of the Rings – Misty Mountains

The Misty Mountains in Lord of the Rings Online does a wonderful job of evoking the majesty and tempestuous nature of mountains – the sudden blizzard that can sweep in, obscuring…

Everyone who plays DDO will know that this week the Shadowfell Conspiracy expansion pack was released. There has been happiness, anger, ranting.. all over the place – twitter, the forums etc.. Here’s my thoughts so far.

Welp, looks like I’m back to livestreaming again, and in my original 11 pm Sunday slot, no less. Only on my own stream, of course. Just wanted to make that clear, don’t want any more grief over that.

But anyway! Gave Even the night off and dragged out newly-20 Shareerad, aka Reera, my semi-gimpy swashbuckler, so that we could finish flagging Mock for the House Cannith raids.

We’d done Blown to Bits and Power Play earlier in the week, so all we had left was Schemes of the Enemy… and while Slvr didn’t need any Cannith boots, Mock and I both did. Plus, collectibles!

I’ve been lazy in leveling my bard. Every time I run my bard (selling stuff) I have this impulse to level him. Just one level. Every time I squash it since I don’t feel like committing the time. But now I’m ransacked running my main toon and I just came out of another shroud run. It’s not that I can’t find anything else to do – I did some IQ yesterday, but these are the times when I feel tempted to do something else, while I wait for the shroud timer to run out.

So against my better judgment I decided to see if I couldn’t squeeze out some XP and maybe get halfway to level 7.

What a mistake that was.

The eight-pointed star has been the symbol of chaos for so long… that in some ironic way it has become the law. And yet chaos champions and sorcerers still build with that symbology in mind, sometimes crafting massive arcane structures that tell all who see them that they are massive, immutable structure dedicated to change and mutability.

No one ever said chaos sorcerers were clever. But it could just be that they have a strong sense of irony.

To add confusion to the issue, the temple may be called “the octagonal temple” but it is eight-pointed, not eight-sided. Chalk it up to self-aware chaos sorcerers again.

And when you can see basically see a chaos symbol from orbit, it doesn’t take too long before some warriors and nobles collect a motley crew of “adventurers” and holy warriors to destroy it. Which appears to be the case with the octagonal…

Syncletica has been gathering Purple Coins like masterwork gear in a level 2 quest–fast and plentiful. It’s really amazing how this class excels in jumping to the point of flying across the Harbor. I plan to farm the hell out of this area and apply Icy Burst on anything I can get my hands on, especially for Lynncletica, my Mountain Stance grandmaster-to-be. Bursts for her Holy Bursts of Pure Good wraps would be…well, nice! And if time allows, I’ll upgrade my guild’s Monk back with a few select low level wraps with burst on them for the promising group of Monks that are growing there.