Seeing as how this will be my final MMO-related post of this year, I thought it only fitting to look back over 2016 and recall my exploits in MMORPGs. While I did dabble here and there in various titles, such as Firefall, ESO, and Trove, for the most part my year was dominated by six titles — none of them surprising, but all fun and influential in my gaming career.

One of the best things that happened for me in terms of playing MMOs was getting a new computer that could actually run them well. That’s been such a boon.

At the beginning of the year, I had made a resolution to find a “home MMO” and settle my butt down to mostly focus on one title. Initially, that became FFXIV, as it was fairly new to me,, had a lot of positive word-of-mouth, and offered…

In our last post we looked at the games that had been released in Quarter 1 2016 and were pleasantly surprised by the sheer volume of stuff (so much so that I had written far too much and had to split the article) that had been put out there.

Quarter 2 was more of the same, but with a dramatic increase in the quality of the software. In Q2 we see a few incredibly high quality games and one all-time classic (I wonder what it is!)!

So here we are, picking up where we left off in part one. Enjoy!

Back in January I did a ‘gaming resolutions’ post for the first time, here’s a quick review of those resolutions and how I’ve done!

100% for the first goal of the year – I reached cap in LOTRO (once) and EQ2 (twice) over the course of the year. Very happy to finally have characters that can experience new content as it releases in both games.

All caught up in LOTRO 2. Keep up with the story in SWTOR

Not so good for this, as I’ve only played one chapter of the new expansion KOTET. I’ll come back to this in 2017 no doubt to get caught up once more. I was up-to-date for much of the year but the new expansion has put me behind now.

2016 is, if our listen to Facebook, the “worst year ever” and a “year to be forgot” and other such hyperbolic nonsense! For us gamers though 2016 will be remembered as an excellent year for the hobby we love.

In every quarter we were treated to some absolutely brilliant games and more than one all time classic as well, in essence, we were spoilt rotten this year and although three were a number of high-profile flops (or bombas as the Internet now calls them) that doesn’t deminish the quality of the titles.

We also celebrated the twentieth anniversary of the Pokémon franchise, started collecting the rare mythical Pokemon and then witnessed the franchise apart the status quo on mobile while simultaneously becoming the biggest game of the year with Pokémon GO!

I don’t even want to talk about my gaming backlog. It’s big and it’s just not getting any smaller, not with sales and recommendations and all of these pesky new titles coming out. And then there’s my book backlog… and my TV backlog… and my music backlog… and my backlog backlog. There’s a lot of logs around here is what I’m saying.

I guess it’s just not going to stop me from getting a little excited about what’s coming in 2017. MMO-wise, I’m pretty happy with everything under my belt, not to mention that most of the games that interest me are probably more than a year out. But there are at least nine games that I am very interested to at least try out at some point next year… and here they are.

I know, I’ve been more talk than play on this game to this point…

Someone called me a try-hard in relation to ddo, and told me it’s the reason things haven’t always gone my way. I was thinking about it, and they’re sort of right. At times, when there is something I want badly, I tend to get a bit obnoxious. I want it, I want it right away and I will do almost anything to get it… which in ddo has had a tendency to backfire. Or at least partially, as my behavior changes from the person I usually am, to this arrogant, bossy, stressed person. Or it used to.

I know I have been talking about Osi a lot. Of the ppl I have met in ddo, I feel like he’s one of the ppl who’s influenced me the most – and in a good way. Oh, he can be cocky, he makes fun of me and he tells me to do…

Always, always I wish I had more time to play games than I do, and one of the casualties of being an MMO gamer is that it severely cuts down on any attention I can give to non-MMO titles. That isn’t to say that I avoided them all this year! Sitting down this past week, I easily came up with 10 titles that I greatly enjoyed at some point in 2016.

Seeing as how we’re staring down the barrel of 2017 right now, let’s send out 2016 in style with a few great lists!

(1) Tales from the Borderlands

Hilarious, touching, strange, and absolutely gripping, I think Tales from the Borderlands is my all-time favorite Telltale title to date. It even has a robot that I liked more than Rogue One’s K-2SO. Seriously, Loaderbot is the bomb. And those intro music videos for each episode? Classic. My only complaint is…

My bardcher (arcane archer bard) Cerge reached level 23 last time I played him (which is about 2 weeks ago) and with it grabbed Pinion from his TR bank. I wanted to make a gif of him shooting his bow, and here you have it folks. Click on the image below to view the animation. The first picture shows him shooting normally and the second with manyshot. 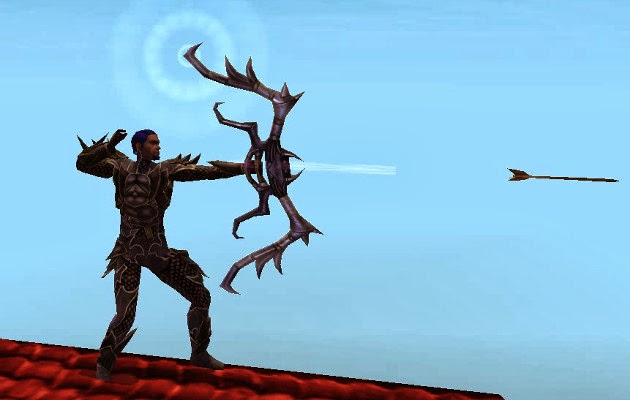 Wow. 2016, huh? Why does this have to be a leap year and make us suffer through one extra day?

Even aside from all the celebrity deaths, this year has seen both of my parents suffer severe health problems, leaving me to mostly take over dealing with my mother (who’s already driven both of my brothers away). And in just the last month, I lost both of my 14-year-old kitties, about two weeks apart. I got my first cat when I was five and since then have never been without at least one until now; it’s the first time since I was maybe two or three that I have no pets of any kind.

I’ve had one really good thing come out of 2016, and a couple of minor things. But overall, it sure has been a tough year.

Just two nights ago, Abs and I were talking about all…

I promised my guildies I was going to host a Titan raid. The problem was that I’ve never known the puzzles well enough to guide a party. I did a trial run a few week ago, didn’t plan the pre very well and messed up the raid. This time I had a much better plan. I ran Maidae and brought Godscraft and Zendarth with me.

I started with purple and red crystals – to get to the underwater puzzle. The underwater puzzle requires 3 people. After finishing the puzzle, Maidae killed off the golems, and abundant stepped to the levers near the barrier. She could open the first barrier – red, before hitting a black one – a lever that must be pulled elsewhere. Godscraft and Zendarth d-doored back.

Once getting back to the head that gives purple and green, both of them throw the purple to pick up the…