Old and decrepit stone stairs lead down into this massive hole in land – down to the Hall of Daniau the Defender, last of the knights of the Order of the Ivory Sentinel.

The first side chamber on the descent is barred by a stone door magically closed awaiting the next member of the Order of the Ivory Sentinel to enter. Within is a small bathing chamber on the left followed by a chamber where knights were expected to change into white robes and anoint themselves with sacred oils before washing their feet again at the bathing chamber before continuing the descent.

The Hall of Daniau the Defender

The next chamber would normally be avoided by most coming down this way, but with the collapse of the stairs, the Cavern of 36 Blessings must be traveled through to get further down.

The Cavern of 36 Blessings contains a number of floor…

After yesterday’s LE Shroud, I started thinking about how to get more PRR on Thaz… and I realised that each divine epic past life gives a passive +3 PRR. So.. I decided to eTR to get more PRR. Here’s the before and after of Thaz’s 8th eTR.

Usually I don’t like to have a different background, but I had already logged off and didn’t want to log back in… so there they are.

That’s all for this time.
Tc.

I was recently reading up on the newest expansion for Rift, Starfall Prophecy, and I came across this rather interesting feature – a puzzle dungeon. Most questing content, and certainly the overwhelming majority of dungeons, in MMORPGs involves a good amount of combat. So to have a dungeon dedicated to puzzles is something I’ve not seen before.

If I think of puzzles in dungeons I think nostalgically of Dungeons & Dragons Online, the game had them quite often, whether in the form of sets of keys (or key-like items) and matching locked doors or more elaborate devices that would block onwards progress. Combat was usually present even in puzzle-heavy dungeons, however.

Lights will open the way

The Secret World has puzzles as a discrete category of mission/quest. These missions tend to be at least partly in the open world, so not really the subject of this post; also for…

Leave it to me to be all noob on video…

If you read last week’s blog, you might have noticed a hint about possible changes coming to my Sunday night livestream. There was just one small hiccup at the start of the show… a couple of people told me I wasn’t streaming. I said that I was. Turns out we were both right – I was streaming, but I’d forgotten to change the stream key from my own to the DDOStream one.

I followed that up by boldly asserting that I knew the way to ADQ part 1… and then forgetting which pathway I took at the beginning. But this is what guildies are for, and fortunately I had Seki and Slvr to get me pointed in the right direction.

Once those little glitches were over, things went really quite well as we three-manned EH ADQ 1, EE ADQ…

As I was xping one of my characters the other week, Short told told me to dual box for TP. I didn’t that tine, but as I TR’d Firetha, it hit me that I could create a leveling buddy for her on one of my alt-accounts.. earn some TP for that account and make leveling the wizard easier. So, I made “Smashbaby Trapfinder”, a barbarian. 🙂 So far I’ve been enjoying this character a lot. 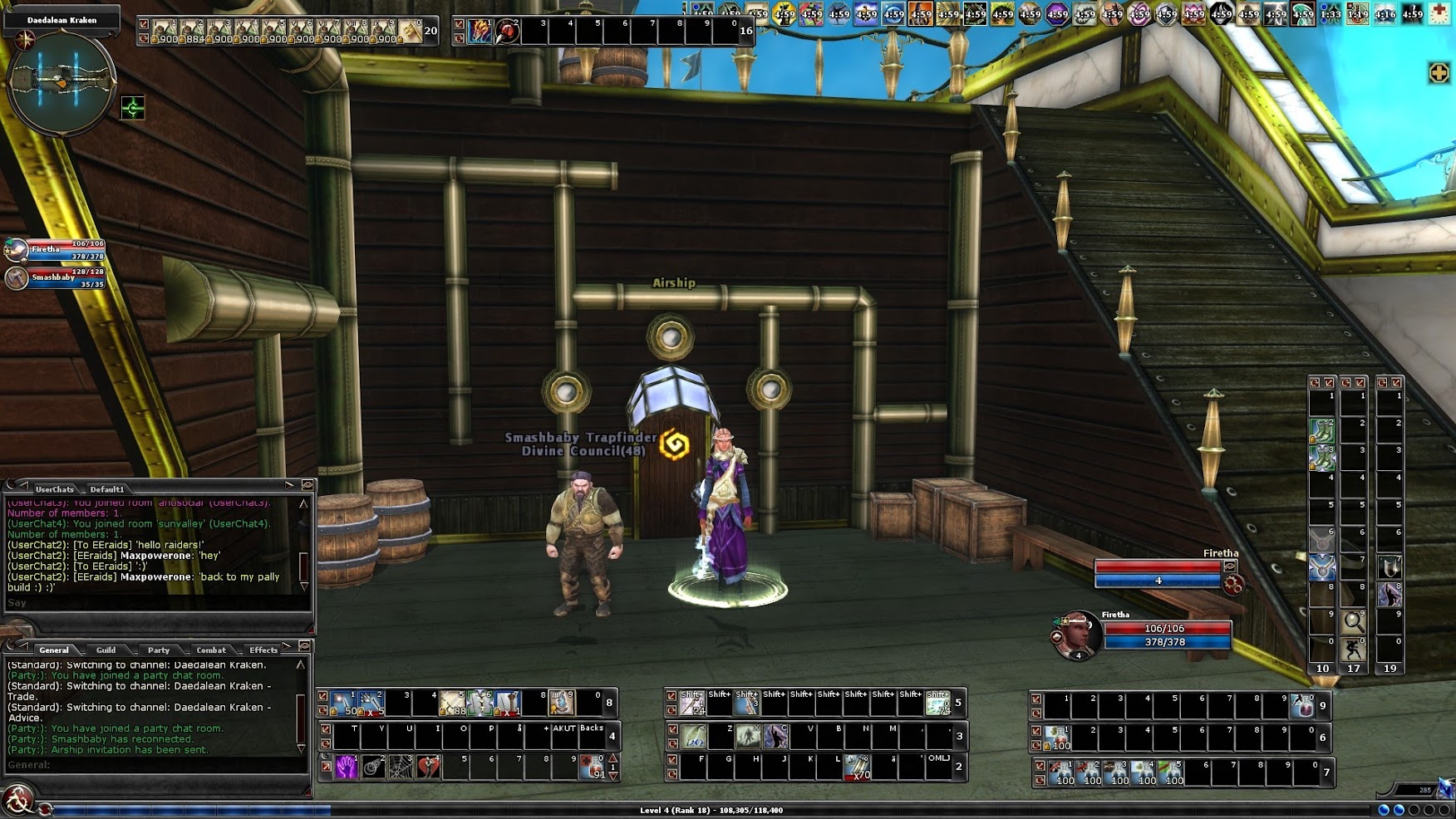 That’s all folks.
Thank you for stopping by.

So, honestly, I don’t really have much to blog about. But I’m overdue writing something so I though I’d better do a random update 🙂

Hymm
I TR’d Hymm a month ago and have been running him weekdays with another guildie. He’s currently at 14 with 15 banked. The plan is to have him be a 8 ranger / 6 rogue / 6 monk stick build. So far the build is working out well. The damage is good and the ranger levels enabling many shot.. well.. many shot is my new favourite thing 😀 With the changes to XP I was worried about how leveling would go. We’ve seen the XP drop on repeats, but the change to the XP curve from life 3 onward has not been changed yet. So far it’s been OK. But from level 12 we have noticed it starting to become a bit of work…

I based my progress on the idea that it would take me a ton of grinding getting to 8 and then skip to 16 but the reality is that the skip is where there terrible grind is. But there’s something that should be told about adding Elite streak 50%, Elite quest 80%, 15% Holiday bonus, Greater tome of learning 50% and a 30% pot, Boat shrine 4% and VOM 5%. And suddenly your awash in XP. STK, several 11k XP. Sharn Syndicate – most of them 4-5k. Tangleroot – 2-5k easy. Deleras last everything from 6k to 26k (and in between 24k). Each time I hit those levels I thought I had to do a big one say STK and then grind but I hit the next level doing STK. Same with doing Tangleroot. Hit another level.

I was very tired this week when it was time to host shroud.. but I wanted to do it anyway. Within 15 minutes we were a party of 10.. it took a good 20 minutes more before we managed to fill. I ate a festival candy that gives +5 prr before we started, and I managed to stay alive all through part 1, for the first time. But as we got to part 2 we started struggling, and then one of the reds died… So, after a long struggle, we realised it wasn’t going to happen, so I called forfeit.

I was playing LOTRO yesterday, moving deeper into the Lone-lands zone, when I came across not one but two areas chock full of signature (aka elite in other games) monsters.

Were I playing my warden I’d probably not worry much about fighting such things, I was able to solo a few on my newish Rune-Keeper, but it wasn’t easy and pulling more than one at once wasn’t safe. I may not be that optimised for my level, I’m not wearing full sets of crafted gear, but I have been grinding out deeds and do make use of buff food and scrolls.

Using tactics such as leashing mobs carefully so a pair is split by one resetting, and being careful of patrols and my surroundings I was able to work my way into the gathering node I was originally aiming for but then I realised I was deep into a full…

Ramblings of a MMO gamer guy

In theory it is summer, despite this theory it has been cold and raining and the kids have managed to drag home another round of sickness which has slowly worked its way through the family. I’ve been wiped out for almost a week now and art and gaming has been very much on the back burner (slept from 7pm to 7am yesterday)

Starting to see the end of it now and looking forward to breaking open my birthday loot and cracking on with the December challenge.

and here is the latest one from last week. (Still struggle with eyes some days :D)