Since the Night Revels has been open, I have been taking various characters through Delera’s Graveyard to obtain keys.  Since I like to switch up my character runs daily, I seemed to recognize that some characters picked up more keys than others. Of course this was just pearly based on my subjective observations.  Looking back at my notes, here is what I recorded:

Now one thing you can definitely see is that during this past week or so, my quest runs have been primarily with characters in the level 15 to 17 range.  Since Erdrique and Sttollen I tend…

Happy Halloween everyone! May you have a truly spooktacular day.

The concept of limit time events in video games is a newer one thanks in large part to the reliance on the internet. While some may lament the loss of single-player and couch-coop elements in favor of sprawling online-enabled games these days, there’s no doubt that without this constant online connection, fans would be missing out on these special and sometimes holiday flavored updates.

Considering today is Halloween, I thought it’d be fun to take a look back on a few of the best Halloween inspired events and updates for some of our favorite games. More and more developers seem to have really started embracing these sorts of activities each passing year so if I managed to miss your favorite, let me know in the comments below!

Without further adieu, here’s my list of some of the most frighteningly good times!

Now that the veil between our world and the world of the dead is at its thinnest, I can think of no better time to play games that’ll scare us stupid!

Last Saturday I was on at just after 9 pm my time (3 pm EST) and posted for LTS. There was a good amount of interest this week as well, and I quickly had both str and int for the run. I was running Cerge, as Thaz is still not capped after the last eTR. The first screenshot from the run has the time stamp 9.25, so it took about 20 min for us to fill and get started. This time the run wasn’t as smooth as the week before and we struggled quite a lot in fire and ice, to the point where I felt we needed to change tactics. I died twice there as well. We got it done and were able to continue. The rest of the raid was pretty smooth and we had a good amount of dps for the end fight. We finished in 30…

A not long time ago, on a server not so far away…

Months ago, as summer began, I found myself disheartened with DDO. As I have done a few times before, I grew tired of the same old grind andtook a break. Unsure of the exact cause, many factors contributed. Whether it was the discontent over the new crafting system (haves vs have-nots), everyone wanting to play nothing but Reaper (and being completely inept at it), or just worn down over playing the game so long, I just didn’t seem to get any joy out of playing DDO anymore.

During my time away, I tried a few games in an attempt to fill the void left by no DDO, and some were quite fun, but things such as micro transactions really destroyed the experience overall. Many MMO’s bog down gameplay unless you either subscribe or spend a fortune buying all… 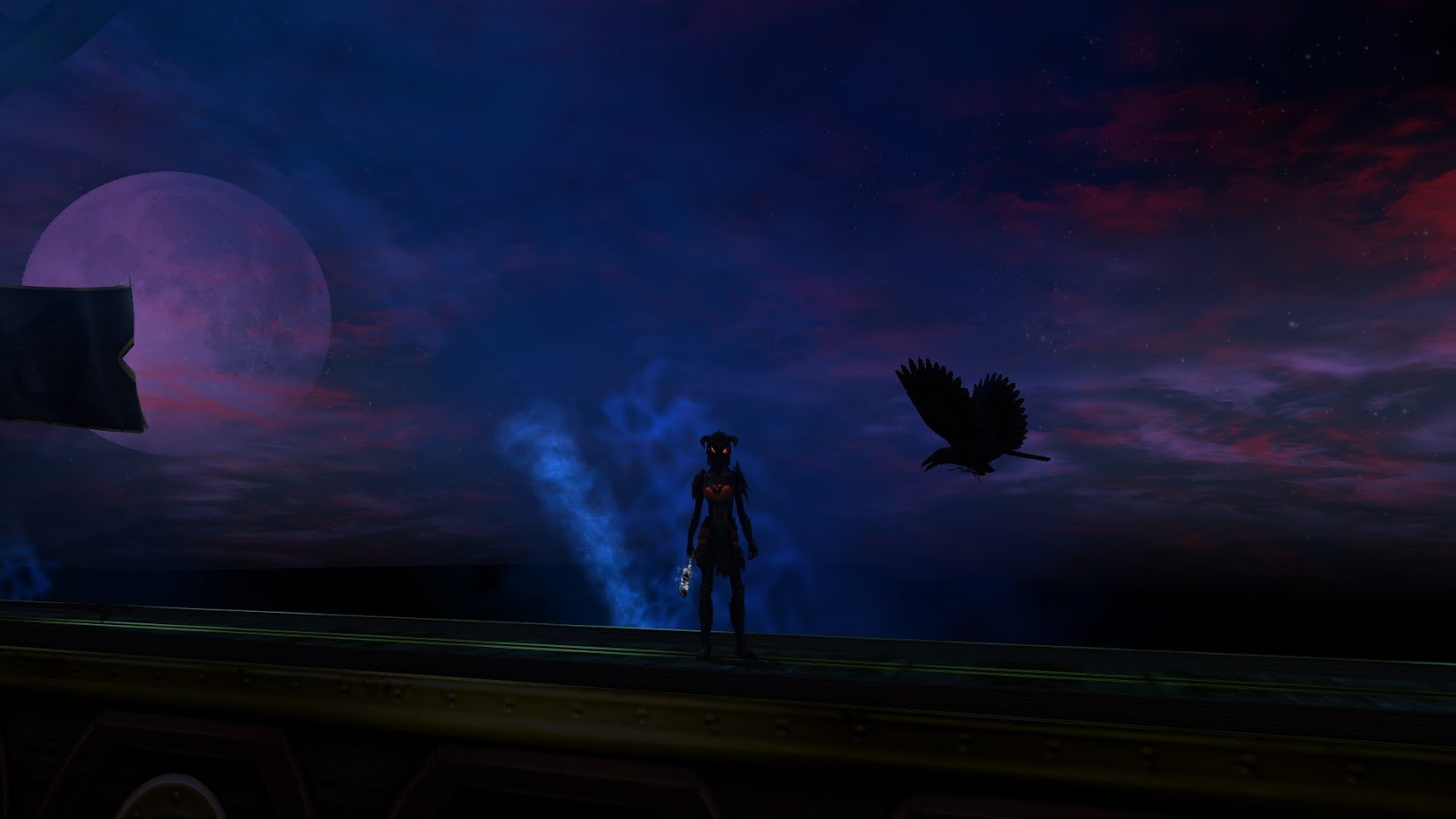 Thazara is wearing Red Reaper’s Platemail and Red Reaper’s Helm cosmetics, she is holding a Short Broom of Mystery cosmetic with Barovian Mist Glamored Weapon Aura, and is showing of her new pet raven.

Although there’s been quite a lot of heavy commentary about Pay to Win and lockboxes of late, I haven’t felt that drawn into the arguments myself. I’m AFKish this weekend to do a weekend of D&D (pen and paper ftw!), but I’m also too busy having fun in MMOs to worry about payment models.

I’m slowly leveling a new Artificer character on Orien, a new server for me and one that seems a lot busier when I’m likely to be active. I’ve almost finished on Korthos and have dinged him level 3 already. Although taking my time on the island means repeating dungeons a number of times I am focusing on getting rep with the Coin Lords faction as a first priority – the extra bag slots are well worth the effort.

My play through of Path of Fire with my husband continues…

Time for another trio of Dungeons and Dragons Online quests in the Harbor. Let me start out by saying that I think DDO kind of shoots itself in the foot with many of the Harbor quest settings. There are just too many generic warehouses and sewers with a uniformly blah color scheme, and this does the game a disservice. You think that DDO would want to front-load beautiful, exotic, and exciting settings, but nah, here’s another river of drab olive sludge to climb through. Good thing it’s still pretty fun.

I’m pretty sure that I do not play DDO in the proper way, because my Gnome keeps running-and-gunning like she’s in Quake or something. It’s remarkably relaxing and fun to do this, just pew pew pew all over the place and watch things die. My robot dog rarely gets to kill things, that’s how fast I’m slaughtering the population. Probably…