Beneath the Immortal Fortress are a number of small dungeons, tombs, crypts, and oubliettes. As the fortress itself is still inhabited and the residents know better than to explore these lower areas, they remain generally unmolested, with the entrances of the more dangerous areas under guard in case anything should creep out. Crypts of the Immortal Fortress

These particular crypts were considered inconsequential until a planes-hopping sage showed up with a map indicating something important within – so if you can get into the fortress, getting to the crypts themselves shouldn’t be too hard of a task.

Behind the scenes, this is actually a redraw of a small crossword puzzle posted during the Alternate Reality Game that was played online leading up to the Stream of Eyes event where they announced the upcoming release of the two 5e Waterdeep books this autumn.

The maps on Dyson’s Dodecahedron are released for…

Recently I read an interesting post by Bhagpuss of Inventory Full. He starts out talking about WvW in Guild Wars 2 and ends up veering hard into the realm of existentialism (and if that doesn’t convince you to give his blog a try, I don’t know what would).

It touches on a topic that comes up often in gaming circles. It gets phrased different ways, but fundamentally, the question is, “Are we wasting our lives by playing video games?”

Bhagpuss’ answer to that appears to be a hard no. Many feel similarly — that if you enjoy yourself, it’s not time wasted, no matter how impermanent and abstract video games may be.

As someone who has spent what is by almost any standard an unhealthy amount of my life playing video games (and engaging in other pastimes), I have a more complex view of things. I don’t regret all of…

The last post I did about Thaz’s gear was posted April 15. Since then I’ve adjusted and readjusted her gear several times and I realised it’s getting difficult to keep track of it all. So, I decided to make a spreadsheet, and since I also wanted to also keep track of her old gear setup, I decided to do a new tab each time I do a major gear swap. 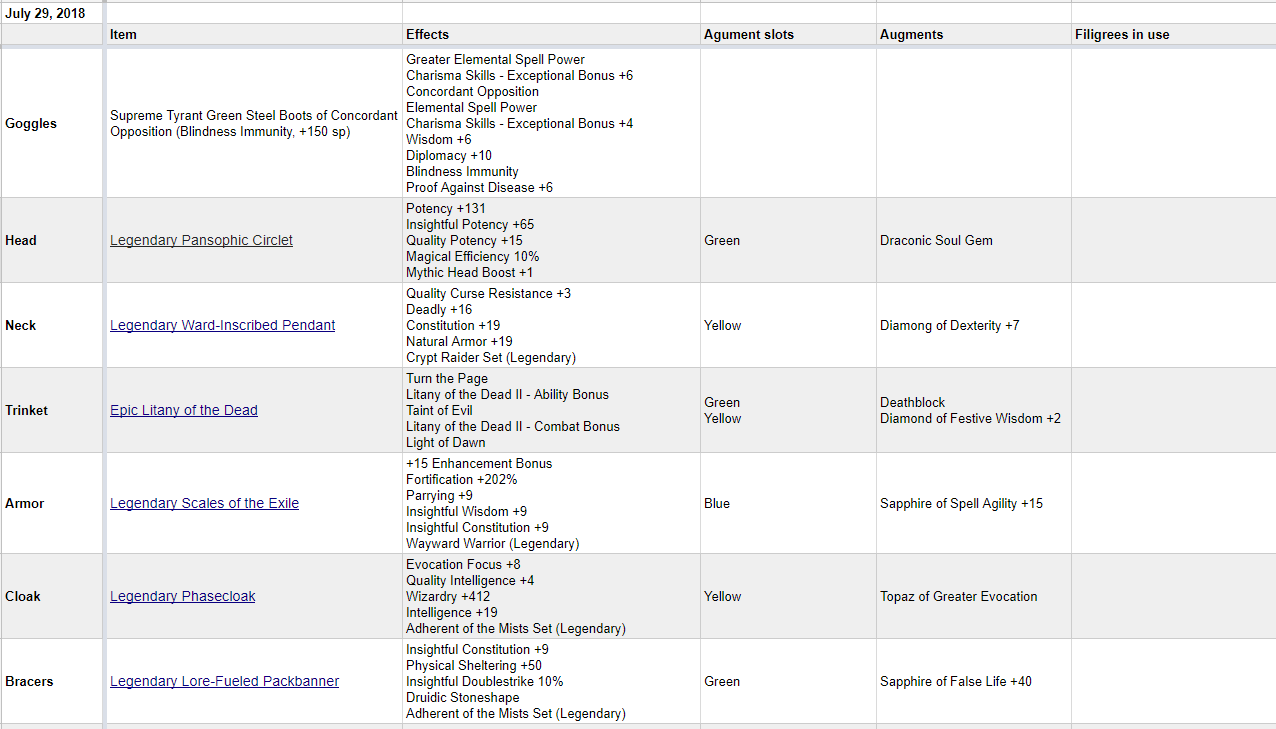 Surprise, it’s not the normal Level One Wonk this time, though I am gladly ripping off his format. At the start of the month, nominations for the ENnie awards were released. The nominations present a wonderful resource for GMs and gamers, and similarly for game reviewers. It had turned out that a number of nominations were games that we had written about in the past, but there were plenty more for us to study as well. In particular, there was one category that interested me: Best Free Game. Occasionally, players and GMs run on tight finances but still require their gaming fix. SRDs are plenty helpful, but sometimes you want to try something a bit different. A number of these games are more demos or skins for games that stop early than full, completely ready out of the box systems, but it is enough to get started, and to see…

Blogging for me has mostly been an exercise in being organised, or perhaps more accurately trying to be more organised. When I started the blog I was working part-time and studying a master’s, so I had enough on my plate already. From the start it was about organising my ideas and time to meet the self-imposed posting schedule I decided upon (and later revised).

Part of that was simply getting into the habit of needing regular ideas and content. I got into the habit of taking screenshots in all the games I play just to have nice pictures to post on my blog. I also keep a simple text file on my phone where I can type in ideas for posts whenever and wherever I am, ideas can pop into your head anywhere! Many of those ideas never made it into a full blog post, but organising your thoughts as…

…He was an Envoy. And a prototype Envoy at that. The Original, actually. Cannith never made another like him. It explained quite a bit about him too, why he was so driven to tasks that did not involve killing, but rather, involved creating – of course… creating tools that could be used to aid in killing… No matter.

He was the Original Envoy. Every unique Warforged was modeled after him. That was… A lot to take in. And so long ago… It’s no wonder he had issues remembering so far back. It also explained why he was immune to certain overrides given to him by other Artificers and tinkerers. He flat out did not have the cookie-cutter design model that the Warforged that came after him had.

He had been built for artiface. Built to be augmented. Built to stand the tests of…

Saturday last week I wanted to post for R1 or EE babas, but since some of the Sokos were not on, I figured we’d see what kind of group we’d get. Interest was somewhat good and I didn’t have to wait too long for the party to fill. I saved the last spot for a tank for a little while, but since the party seemed fine with doing hard, I decided to fill the party without a dedicated tank. I asked Osi to go left, and Doobrey went left too to help with totems, the rest I told to pick sides somewhat evenly. I went right as I prefer to do. During our first run in the hut, after a few totems we were hit with crippling lag and I called a restart. I figured we’d save time restarting than trying to fight through the lag. After a restart things…

As someone who grew up with Nintendo, it really warms my heart to see the company doing so well once again after the struggles it experienced with the WiiU. Lately, I’ve been fitting the late adopter mold, grabbing the WiiU and now the Nintendo Switch outside of its typical release window. While the WiiU never really struck a chord with me, my time with the Switch has been a revelation thanks in large part to the most unique thing about it: portability.

I’ve always really liked the design of the Switch, ever since it was first shown off but it takes on a whole new meaning once you actually get your hands on it. This summer I’ve gone on a few trips and facing some downtime, it was the perfect time to actually try out the Switch on the go.

Frankly, it was an amazing experience. The small nature of…

The day foretold in the Draconic Prophecy has come. and Eberron has returned to Dungeons and Dragons 5th Edition! The planned settings announcement went live on July 23rd, and to accompany it came the PDF of the Wayfinder’s Guide to Eberron (don’t worry, we’ll pay due attention to the Guildmaster’s Guide to Ravnica when it comes out later this year). We grabbed a copy pretty much right away, and after a few days to read through it and digest the contents I’m ready to talk about what’s in it, what’s not, what it all means, and where Eberron and D&D go from here!