As we were getting ready to run Lines of Supply last week I decided I wanted to try and stand on the fir-tree outside the quest. The party entered and started, while I was determined to get a screenshot on top of the tree before entering. I succeeded and then ran after the party. 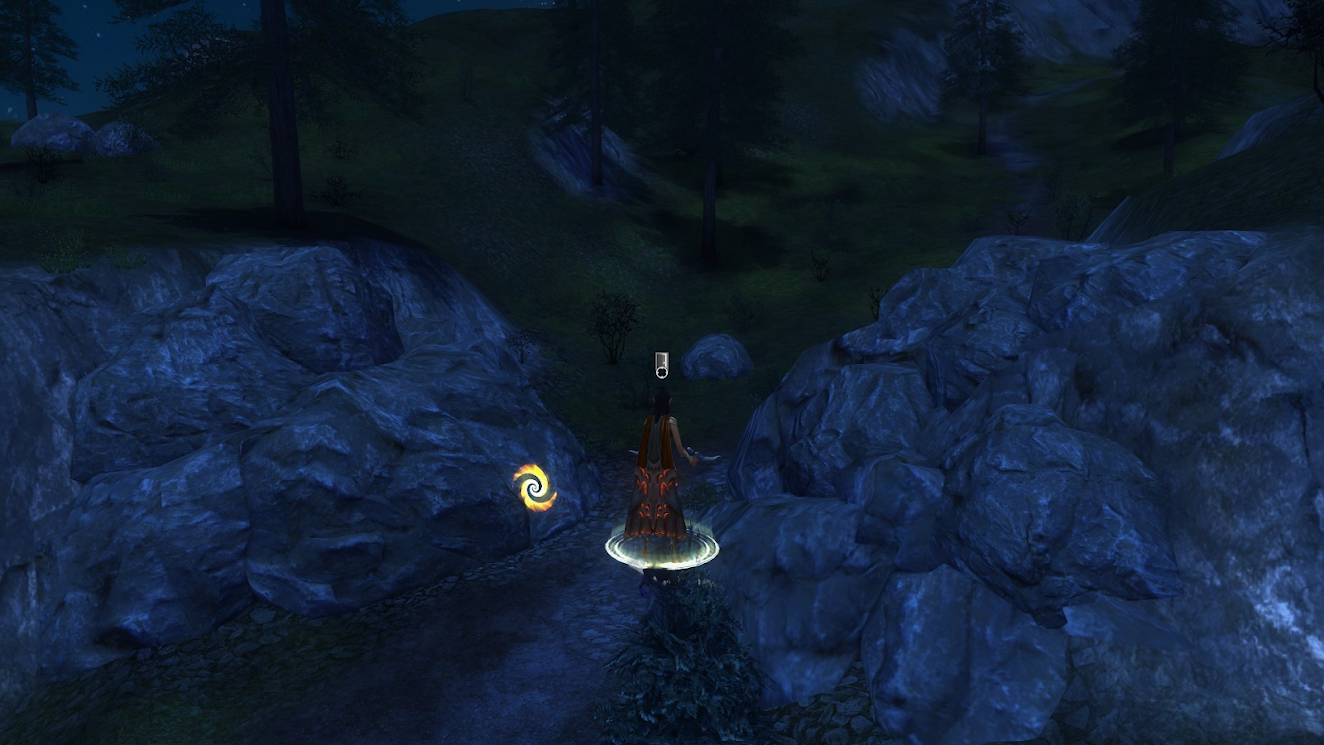 Sony has announced the games being put on offer through PlayStation Plus this November, and they’re actually pretty decent. On the one hand we have Outlast II, a game that is still very spooky despite not living up to its predecessor. On the other we have Nioh, which could also be considered scary in a way. It just depends on what you find scary.

There’s a slight case of civil war going on, caused in part by the party (when I wasn’t involved).

We decided we would travel south to Basilisk Lake to find the (rich) refugees who hauled ass out of town when they caught wind of the insurrection. They are waiting for rescue by Imperial troops from the south, but it seems the Empire is pretty much unaware of them.

The first day out from town we ran into a group of pagan forest folk who took offense to our Imperial outfits, southern accents, and townie ways.

They killed one of our crew, as well as…

Raids 145 were Wednesday Oct 23 and Saturday Oct 26. I also joined Epic’s raids on Tuesday, but they’re not listed here. We did a total of 10 raid runs in these 2 raid nights.

1. Project Nemesis LH
I posted, we waited and we didn’t quite fill, so Epic brought in Epicsue to tank and was dualboxing. I asked Osi to take Rudus again. I was on laser. Completion time: 21 min, 36 s. Loot: 84 nemesis runes, 30 threads of fate, no named. The RPG space is filled with unchecked assumptions regarding what gaming groups actually do. We already know that market information is hard to find, but it’s even harder to find information on how people consume whichever RPGs they choose to consume. Are they playing mostly in organized games hosted at game stores? With a group of friends at someone’s home? At cons? How often do they play? How many different systems do they try? We have, as one of my players once said, no hard data but a lot of assumptions and circumstantial evidence. The one element which is most significantly reflected in how games are actually designed is how long a discrete ‘game’ or ‘campaign’ is intended to be played.

The art is the draw for me. Erol Otus, Bill Willingham, and others. TSR was notorious for recycling its art over and over throughout various products. But this wasn’t the case with the monster cards.

More about the monster cards over at our Reference Site.

By chance last weekend I ended up watching both Blade Runner movies over the weekend. Watching the newer 2049 film because it caught my eye on Netflix, I then had to watch the original 80s film just to remind myself of the earlier trope defining film. I enjoyed both but was left afterwards with a conflicting desire to either run some Shadowrun tabletop RPG ASAP, or to at least play a cyberpunk game – sadly there are no live MMORPGs to scratch that particular itch. Cyberpunk 2077 will be a RPG that could well be a winner but then that doesn’t release till April by which time I’ll no doubt have forgotten about this post.

In the meantime I fully expect to be back playing Star Wars the Old Republic after I’ve seen Star Wars Episode IX in December. That’s a well established pattern, a good blockbuster film always…

(This is part of my journey going playing through 2010’s Fallout New Vegas. You can follow the entire series on the Retro Gaming page.)

The journey from Primm to Novac ended up being surprisingly long, taking several gaming sessions and not just a few detours while in the wasteland. My favorite part was coming across two battling groups that I let kill each other so that I could loot their corpses in peace.

Eventually, however, I arrive at this fabled town and bear witness to its dominating landmark: a giant dinosaur statue (that also doubles as a gift shop). I also learn that “Novac” is short for “No Vacancy,” as in a modified hotel sign. Ah. Gotcha.

Bizarrely, Victor the Cowboy Robot shows up, having felt led to cross the desert and beat me here… for some reason. He doesn’t know what, and I get the feeling that there…

One aspect I love about the RPG hobby is that I always have something new to learn. And, yes, sometimes I learn things that the experts already know.

I did know that the BECMI D&D Expert Sets went through some graphical changes on the boxes to bring them in line with the subsequent Companion, Master, and Immortals sets.

The earliest date I’ve seen for this change is a box stamp inside the lid of 7/87, meaning July 1987 of course. This switch probably happened earlier; I only started paying attention to these box codes in the last few years.