Rise of the Runelords #44: The Shadow Clock

In a missing chapter of our tale, the party defeated “Justice” Ironbriar’s cult and found that his gang had committed the ritualistic murders in Magnimar. He also communicated with “the beautiful Xanesha” in the Shadow Clock in the city’s Shadow District. The party enters the precarious clock tower… -GM 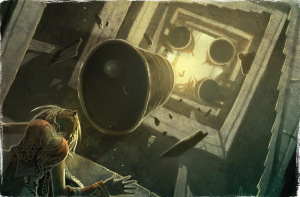 The party picked the lock on the doors to the clock tower. They then went inside, where they were promptly attacked by a vicious duo of golems! Fortunately, they managed to eventually vanquish them, but not without the near death of a few party members.

After healing their unconscious allies, they began climbing the ramp spiraling around the interior of the tower. After climbing quite a bit, they were caught off guard when a massive bell fell towards them! All of them managed to avoid the bell, with the exception of the monk, who fell to…