As Uncle Tubbs is working on his Epic Completionist at the moment, I’ve been looking for new ways to really crank hi s gear up into the ridiculous level of things.  Part of that included checking out his wraps, of course.

He’s got a full array of Thunder-Forged wraps – well, the 24, 26, and 28 sets, at least.  The blanks at 22 aren’t really anything to speak of.  That takes care of everything twenty-four and up.

This caused me to check out the Wiki for the entire array of named wraps.  As isn’t terribly surprising, he’s managed to accumulate the majority of them, and is only missing a few:

The holidays were a very productive time for my DDO Experience, filled with lots of giddies and squee.  Amongst them, my crazy build idea for a melee-focused paladin/artificer build capped out his Heroic life, so I figured I’d share some of the thoughts from it with you.

Paladins are renowned for their passive defenses.  Saving throws that are through the roof, passive immunities to a number of things, and added defenses against evil are just part of the joys.  However, paladins are also renowned for having poo in the ranged damage category;  the idea was to blend in artificer for the heavy repeater use and rune arm free damage with Knight of the Chalice for melee offense.

Orsyn Burr at some random Shavarathian shrine. Accompanying him are NillaWafer the Snowy Owlbear and… uhh.. some orc.

Melee was the prime target;  enhancement-wise, I stacked in the entire…

After adjusting Cerge’s enhancements, I wanted to see if I could fit in stalwart defence on Maidae too. Stalwart defence requires 6 ap, which I had to take from somewhere. I dropped Meditation of War (2 ap) from Shintao, Critical Accuracy and Critical Damage from Kensei (tot 3 ap) and one Extra action boost (2 ap) also from Kensei, which gave me 7 ap. The 6 I spent in Stalwart for Stalwart Defence and the one point extra I put in Acrobatic in Ninja Spy, since I had only put 2 points there and it was one of the things that only cost 1 ap per tier.

I’m posting this as reference for the next eTR. Here’s Maidae’s enhancements: 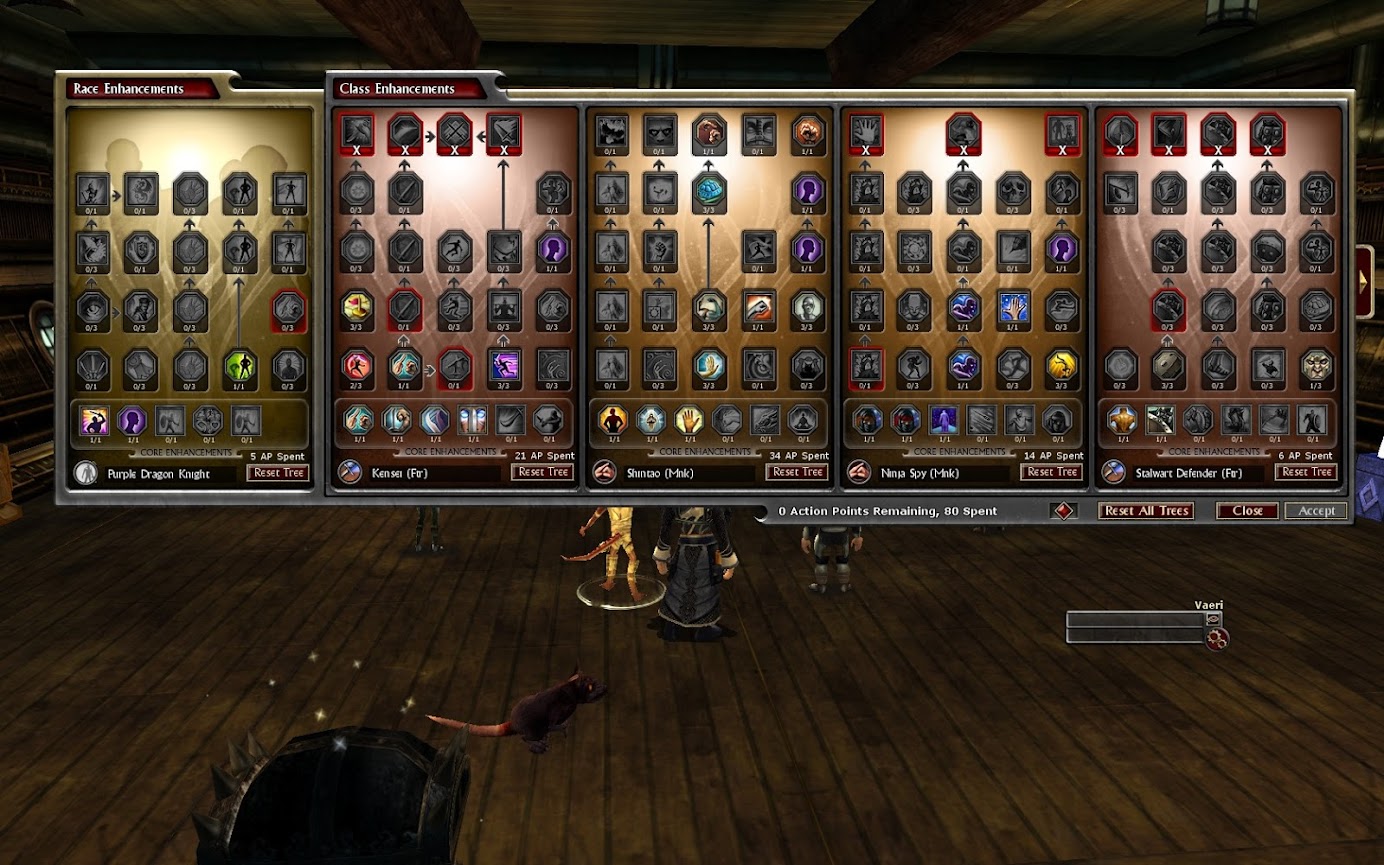 I also looked her gear over as well as Cerge’s. Next I need to check Thaz.

Alright, that’s all folks. Thanks for stopping by and have a great day.

So, Shortslice (who was in OR) quit ddo… only to come back after some months.. or maybe it was weeks, hoping to run into a friend of his. Two weeks ago or so he joined one of my lfm’s and he’s been running with me almost daily since, lol. I don’t mind, I enjoy the company and he’s a good player which makes the runs a little easier. Anywho, I was telling Short how I got frustrated the other day because I just died when I was trying to solo ee An Offering of Blood… and how I got slaughtered in ee Prison of the Planes when I was trying to clear the bath solo. Two wizards, one of them a champion and I was just running around trying to heal myself, while they were nuking the shit out of me. Didn’t go so well. In both cases someone joined and…

Earlier, I had made a post regarding starting a new heroic toon, one with a little something different than that which I have played in the past.  After a bit of deliberation on the various races available, I settled on Half-Orc as the race.

Now, it’s time to take a look into what class to play.  Without further ado, let’s get started!

Oh, wait, disclaimer time:  Once again, this is not an evaluation of the class itself, how good it is, blah, blah, blah, just out-loud musings on something different to play than what I’m accustomed to.  Now, back to the rambling!

While I love them to death – well, with the sole exceptions being the House Cannith artificers in the Cannith Manufactury quests (because let’s be honest, those guys are d-bags) – but that kind of destroys the purpose of playing something new when you’ve got several…

As Uncle Tubbs is embarking on his quest for Epic Completionist after collecting all of the Heroic lives he wanted, I’ve been thinking a bit on something different for a Heroic-level toon.

Sure, Orsyn the Palificer hasn’t quite made it to twenty yet (although dangerously close), but that’s more or less an amalgamation of two classes I’ve done multiple times over.  I’ve had several artificers, but when it comes to paladins and monks, I’ve had dozens of each.

Don’t get me wrong, I still love my paladins, monks, and artificers to death – it’s just time for something different as a side project.  Something different with a splash of serious, not like the short-lived Squibbletooth of the Mighty Toenail, the half-orc artificer/sorcerer, which was just for kicks.

Primary spellthrowers are pretty much right out.  Me behind the keyboard of a caster is tantamount to Jabba the Hutt tutoring a minotaur…

I think I might have to break down and do it.

I’ve been putting it off for a while, but it’s becoming a problem.  With the exception of my “main” main, Tholgrin, and my current mix project Orsyn (the “Palificer Artadin”), I only have one other toon that’s under twenty.

He looks too cool to just leave shelved..

He’s also been gathering dust for (according to the guild status page) four months and three weeks.  Probably longer, if you don’t count just logging in briefly to check for something in his bank.  Truth be told, there’s a very, very high chance that the last time I logged him on was to nick a shield out of his arms collection to pass over to my Favored Soul.

Mattok started out as a flavor build, a pacifist healer that was (at the time) running regularly with a rag-tag…

I have a Bard, a Rogue Assassin and many many Ninja Spies.

I haven’t played a Ranger since Pynthetica’s first life, before the new stealth AI retool and enhancement trees.

And I’ve never tried out one particular flavor of Ranger that deserves some attention with the stealth revisions. This way I can learn more about this class path and shore up information in the Stormreach Shadows stealth guide.

So, say hello to young Artemistika, my first Deepwood Stalker. She just might be the best overall stealth fighter because of her very specific skill set.

What stoked me about the Stalker is the incorporation of stealth with powerful ranged attack. At first it struck me as a support build, like the Rogue. The Stalker seemed lacking, at first, the sustained DPS and imbue versatility seen in the Arcane Archer or the melee complexity of the Tempest two-hander or Ninja Spy.

I very rarely go out to bars or restaurants, I don’t gamble and I don’t spend money on vacation travels, so I don’t feel too bad if I once in a while put some money on DDO. DDO is one of my pleasures and we all gotta have something, no?

So there was +6 tomes in the store the other day (maybe they are still there, I haven’t checked), and tomes were 25% off. I had not too long bought some extra TP… and the TP I buy is meant for tomes and storage, mostly, sometimes augments (when I want an augment NAU, and I can’t be bothered to wait and see if someone else might have it). I decided to get +6 tomes for Thaz, Maidae and Cerge. Thaz got a few upgrade tomes, the ones she was missing, while I got both Cerge and Maidae a supreme +6. Why…

Well I can’t TR without putting a picture up…. 😀

He’s currently 1 fighter / 2 monk / 12 druid. I can already see problems with the lack of spell points – but I haven’t spent any time sorting much gear out so I’m hoping that will help. I do have a stack of mana pots not doing much at the moment as a short term compensation. But the damage is very nice 🙂

He is, however, bigger than Rach’s Shadar Kai!

Have fun, see you around!